In Touch With the Simon Effect

Posted by Tal Oron-Gilad in Tactile & Multimodal displays on November 6, 2013

Abstract:  Cognitive control has been extensively studied using the auditory and visual modalities. In the current study, a tactile version of the Simon task was created in order to test control mechanisms in a modality that was less studied, to provide comparative and new information. A significant Simon effect – reaction time gap between congruent (i.e., stimulus and response in the same relative location) and incongruent (i.e., stimulus and response in opposite locations) stimuli – provided grounds to further examine both general and tactile-specific aspects of cognitive control in three experiments. By implementing a neutral condition and conducting sequential and distributional analysis, the present study: (a) supports two different independent mechanisms of cognitive control – reactive control and proactive control; (b) reveals facilitation and interference within the tactile Simon effect; and (c) proposes modality differences in activation and processing of the spatially driven
stimulus-response association.

Method: Four experiments of tactile Simon task, preceded by an alerting signal (AS) in visual, auditory and two architectures of tactile.

Two types of tactile signals were developed for this task. All stimuli were displayed on the participant’s back. 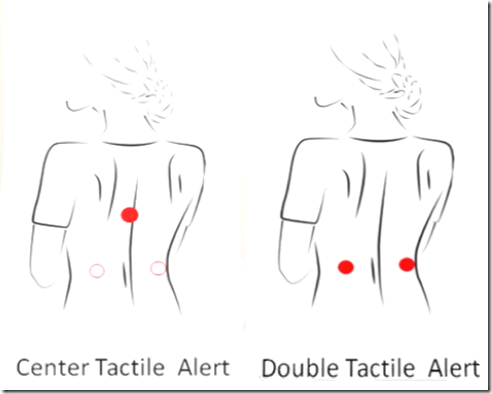