Tal Oron-Gilad is a Professor at the Dept. of Industrial Engineering and Management at Ben-Gurion University of the Negev and Chair of the Department. Here I publish and discuss my research interests.

I began working as a lecturer (academic tenure-track position) at BGU in 2006. When I arrived, there was a researcher website that new faculty were required to complete. I was relatively young at the time, and new to the system, but I remembered a tip given to me by my advisor and mentor, the distinguished P.A. Hancock. Long time before the “me too” campaign, Peter pointed out that in order to counter prejudice and bias of reviewers towards females, female researchers should avoid writing their full names on grant and article submissions and use initials instead (e.g., Jennifer is better off signing J.). Since my name is Tal (morning dew in Hebrew), and Tal is a common name for both genders in Israel, I could still use my name without hesitation.

Back to the story, the BGU website (Researcher profile) required filling the date of birth and place of birth. With Peter’s tip in mind and some notion of privacy, I decided not to fill my year of birth (I did not want anyone to think that I was too young :) or place. It so happened that since I did not fill this information, the default was filled instead. And so I found that in 2006, I was born in Uganda in 1921!!! Why Uganda? My guess is that it is because Uganda in Hebrew begins with an Aleph (the first alphabetical letter in Hebrew) so probably it was the first country on the list. Why 1921? probably the eldest faculty member in the BGU system at the time?!

My BGU Researcher Profile from 2006. Note my age and place of birth.

This research profile seemed to have a life of its own, at some point, it was not possible to edit the system anymore, it became outdated and was replaced by another Profiler. But somehow, it still seemed to draw some information from the BGU system: note that at some point my year of birth changed to 1926,  somewhere in 2013, when I was promoted to Associate professor, this information was updated as well, and in 2015 when I became the department Chair, that also was included in my academic position list. What did not change? everything else, my research interests, my research projects because I no longer had access to the system.

Not long after I arrived at BGU, researchers were asked to fill information on another researcher profile. I do not recall exactly when, but the picture tells that it was quite close to the time I arrived (2006). A close look at this profile, which I can no longer update either, shows again the confusion: I am a professor and a senior lecturer at the same time :), I am also the head of the department (since 2015), but nothing else seems right. And why would anyone care that 15 years ago, in 2003, I finished my PhD under the supervision of David Shinar? Is this really the most important information on a researcher’s website?

Recently (2017), I was invited to give a lecture somewhere. My host introduced me as Prof. Oron-Gilad and then someone from the crowd said: why are you calling yourself a professor, you are only a senior lecturer, I saw it on your website.

Lastly,  to end the story with some optimism, by the end of 2017, BGU has launched a new research profiling system. So far it is current and can be updated by the researchers (Yeah!).  But, its hard to find the profiles because they were not indexed yet or linked to the BGU website. At least here everything is up to date, for now.

Take home message: Not everything you see is true.

The effect of environmental distractions on child pedestrian’s crossing behavior

In this study we examined pedestrians’ crossing decision, body parts’ movement and full body movement, just before and during road crossing in a simulated setup. To accomplish this, a novel experimental setup for analyzing pedestrians’ crossing behavior and motion was developed where the simulated display was synchronized with a 3D motion capturing system. Twenty participants, divided into control and an experimental time pressure group, observed sixteen short (less than 30 seconds) and long road (70 seconds or more) crossing scenarios with varying crossing opportunities. Based on the crossing opportunities they were asked to cross a 3.6 m wide one-lane one way urban road. It was found that the crossing initiation process consists of four incremental movements of body parts: the head and the shoulder first; the hip, wrist and elbow second; the knee as a separate joint, and finally the ankle. Results showed that pedestrians’ decision to cross and body parts movement are influenced by time pressure and wait time for a safe crossing opportunity. Specifically, pedestrians prepare their body parts earlier, initiate their crossing earlier, and adjust their speed to compensate for the risk taken in less safe or non-safe crossing opportunities. Within the control group, women tended to be more risk avoiding than men, however those differences disappeared in the time pressure group. Most importantly, the findings provide initial evidence that this novel simulation configuration can be used to gain precise knowledge of pedestrians’ decision-making and movement processes.

What did we learn about pedestrians crossing movement?
Pedestrians change their strategy as a function of internal and external reasons: 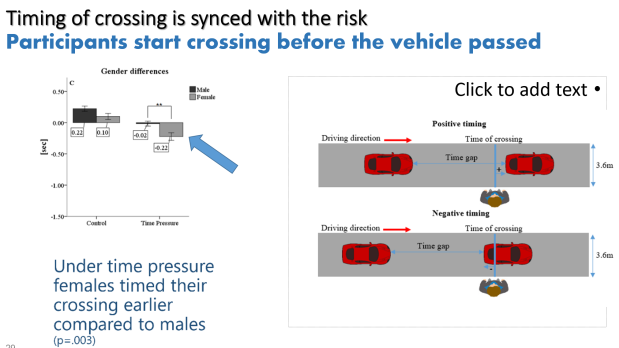 Come meet us at Ro-Man 2017, where Dr, Vardit Sarne-Fleischmann and Shanee Honig will present our work on Gesture vocabulary for a person following robot.

Abstract— Robots that are designed to support people in different tasks at home and in public areas need to be able to recognize user’s intentions and operate accordingly. To date, research has been mostly concentrated on developing the technological capabilities of the robot and the mechanism of recognition. Still, little is known about navigational commands that could be intuitively communicated by people in order control a robot’s movement. A two-part exploratory study was conducted in order to evaluate how people naturally guide the motion of a robot and whether an existing gesture vocabulary used for human-human communication can be applied to human-robot interaction. Fourteen participants were first asked to demonstrate ten different navigational commands while interacting with a Pioneer robot using a WoZ technique. In the second part of the study participants were asked to identify eight predefined commands from the U.S. Army vocabulary. Results show that simple commands yielded higher consistency among participants regarding the commands they demonstrated. Also, voice commands were more frequent than using gestures, though a combination of both was sometimes more dominant for certain commands. In the second part, an inconsistency of identification rates for opposite commands was observed. The results of this study could serve as a baseline for future developed commands vocabulary promoting a more natural and intuitive human-robot interaction style.

link to our poster.

We are excited to present our studies in the 10th University Transportation Centers Spotlight Conference on Pedestrian and Bicycle Safety to be held December 1-2 ,2016 in the Keck Center, Washington DC.

Here is a link to a short description of the BGU pedestrian laboratory.pedestrian-lab-brochure and to a short brief about the work we are presenting (Child Pedestrians’ perceived risk of the crossing place).

Oron-Gilad and Parmet (2016) in the Journal of Cognitive Engineering and Decision Making.

Practitioner Points
•• The use of a handheld monocular device for intelligence gathering of information from a UGV affected participants’ ability to detect events with their own eyes.
•• Soldiers were aware of the toll that display devices had on their operational mission, yet it continuously attracted their attention.
•• Soldiers must gain understanding of the capabilities and limitations of the unmanned vehicle and its sensor video; they should be able to control the pace of its progress.
•• Team setups, where only limited designated roles attend to the sensor video and more than one individual attends to the immediate environment, may be a better setup for utilization of the technology.